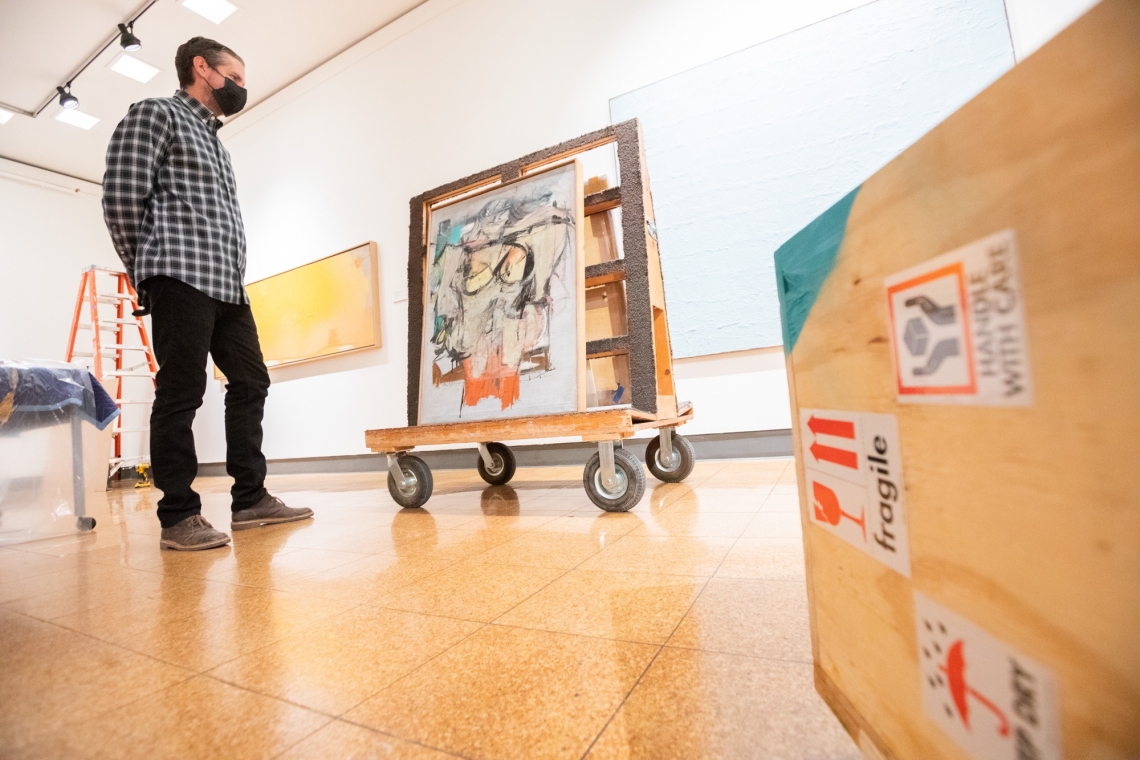 Albert Chamillard, exhibit specialist at the University of Arizona Museum of Art, examines Willem de Kooning’s Woman-Ochre for the first time after lifting the painting from its crate on Sept. 19, 2022. The artwork, which was stolen from the museum in 1985 and recovered in 2017, made its way back to campus this month from the Getty Museum, where it underwent a complex restoration. Photo: Chris Richards/University of Arizona

It’s been a long journey for a painting stolen from the University of Arizona Museum of Art 37 years ago. But Willem de Kooning’s “Woman-Ochre” is finally home for good.

The painting, which captured international attention following its shocking 1985 theft and its recovery more than three decades later, arrived on campus via 18-wheeler with a Homeland Security escort on the night of Sept 14. The truck had traveled 500 miles from the renowned J. Paul Getty Museum in Los Angeles, where the painting was displayed over the summer following a complex restoration by Getty conservators to repair damage sustained due to the theft.

“Woman-Ochre” will go on exhibit at the University of Arizona Museum of Art on Oct. 8.

Olivia Miller, interim director and exhibitions curator at UAMA, was among a small group of university staff and law enforcement officials gathered when the painting arrived on campus after dark.

“Seeing it come back was this moment of relief and peace of mind that yes, this painting has come home,” she said.

“It’s not just us at the museum who are excited about it,” she added. “Everyone on campus is excited, everyone at the Getty is excited. The fact that one painting can make all these people come together is – I don’t know – there really are no words for it.”

The stranger-than-fiction story of the theft of “Woman-Ochre” began the day after Thanksgiving in 1985, when a man and woman entered UAMA just as it opened for the day.

While the woman made small talk with museum staff, her partner disappeared to an upstairs gallery where one of the works on display was “Woman-Ochre” – an oil painting completed in 1955 by Dutch-American abstract expressionist Willem de Kooning and donated to the university in 1958. The man cut the painting from its frame, rolled it up and walked out the door with it.

By the time a security guard noticed the painting was missing, it was too late. The pair was gone.

For years, the FBI had little to go on besides a rough sketch of the suspects and a description of a rust-colored sportscar leaving the scene.

It wasn’t until 2017 that there was a break in the case. That’s when a trio of antique dealers in Silver City, New Mexico, made a surprising discovery.

The phone call no one saw coming

David Van Auker, Buck Burns and Rick Johnson – owners of Manzanita Ridge, a furniture and antique store in Silver City – had acquired the estate of a woman in rural New Mexico, and one of the items they found in the deceased woman’s home was a painting, hanging in an inconspicuous spot behind a bedroom door.

The shop owners took the artwork back to their store without giving it much thought – that is, until customers began asking if the painting was a real de Kooning.

Van Auker took to Google and came across a 2015 Arizona Republic article on the 30-year anniversary of the art theft. The story included photos of a painting that looked very much like the one in his shop. It started to become clear that he and his business partners were about to be part of something big.

Van Auker called UAMA and was connected to Miller, who asked him to send some photos of the painting in his possession.

As the images came in, excitement began to grow, and the next day Miller and other eager UAMA staffers were on the road to Silver City – about three hours east of Tucson – to see the artwork for themselves.

While none of the staff members had worked at the museum in 1985, the theft had become the stuff of museum legend, and the idea that the painting might actually be returned was almost unbelievable.

“When we were driving there, I was in a minivan with our interim director at the time, and a couple times we just looked at each other and started laughing hysterically,” Miller recalled. “We were, like, ‘Are we seriously driving to Silver City, New Mexico, in your minivan to go pick up a stolen painting?'”

Once they arrived and saw the artwork in person, disbelief subsided and reality began to sink in. The painting appeared to be the real thing.

“I was able to kneel down on the floor in front of it and take it in,” Miller said. “It was a really special moment.”

Three days later, the painting was on its way back to Tucson, packed carefully in the back of the minivan. Once on campus, it was officially authenticated in a two-hour inspection that ended with a collective sigh of relief.

“That’s when we were finally able to breathe,” Miller said.

But this wouldn’t be the painting’s final Homecoming.

On the road and back again

“Woman-Ochre” had sustained significant damage after being cut from its frame, ripped from its backing, rolled up and later re-stretched and reframed. So, in 2019, the university sent it to the Getty, which had agreed to restore the piece at no cost.

During the challenging research and conservation project – which was slowed at times due to the pandemic – Getty conservators used a series of sophisticated techniques that allowed them to gain new insights into the materials and techniques de Kooning used, as they worked to bring the painting closer to its original appearance. Among other things, their work involved removing varnishes, re-bonding flaking paint, filling in areas where paint had been lost and reuniting the canvas with the edges that remained in the original frame.

“The painting came to us in very poor shape. The brutal way in which it was ripped from its lining caused severe paint flaking and tears, not to mention the damage caused by the blade that was used to slice it from its frame,” said Ulrich Birkmaier, senior paintings conservator at the Getty Museum. “It has been both a privilege and a thrill to be involved in the happy part of painting’s momentous history, and we are looking forward to celebrating its return to the galleries at the UAMA, to be seen and enjoyed by many, rather than just two pairs of eyes.”

The restored painting went on display at the Getty in June, where it remained on exhibit through August before making its trip home to UArizona under tight security.

Michael Torres was one of the Homeland Security officers who accompanied the painting on its eight-hour drive across state lines. He and his team collaborated closely with UAMA, the Getty and the UArizona Police Department to coordinate the painting’s safe transport.

“It was really important that we treated it just as we would any investigation, with the seriousness of making sure that it was safe, that the drivers who were driving it were safe, and that no vandalism or theft of it was going to happen on our watch,” said Torres, acting supervisory special agent for the Homeland Security Investigations Tucson field office.

“I think it’s absolutely fantastic that this painting can finally come back to its rightful place,” he said.

Albert Chamillard, UAMA exhibit specialist, also made the journey from LA to Tucson, riding in the cab of the 18-wheeler that delivered the painting.

Chamillard had been helping plan the UAMA exhibit of “Woman-Ochre,” but he’d yet to see the painting in person. When he arrived in LA, the art was already packed, so he didn’t lay eyes on it until it was uncrated in Tucson a few days later, after having some time to acclimate in the museum vault.

“It’s hard to describe,” he said of seeing the painting for the first time. “I’d been thinking about it in terms of preparing to exhibit it. So, I knew the size, the overall dimensions, the depth. I knew what the painting looked like but, still, it’s different when you open it and it’s right there in front of you.”

Museum registrar Kristen Schmidt, whose job it is to manage and care for the museum’s collection, helped Chamillard remove the painting from its well-packed wooden crate. She then posed for pictures next to the artwork, baring her left upper arm – freshly inked with a tattoo modeled after the painting.

“I decided that I needed a tattoo to commemorate this incredible chapter in my own career,” said Schmidt, who was part of the team who first brought the painting home from Silver City. “I can’t imagine anything better happening to me in my career. … As a collections manager, my job is to make sure that the art is taken care of, so to have a piece returned to the collection – I can’t take credit for it, but it’s very fulfilling.”

Schmidt said the tattoo symbolizes not only the artwork itself but the generosity of the men who returned it. The piece is still a work in progress; the tattoo artist has ordered ochre-colored ink to complete it.

“Woman-Ochre” gets its happily ever after

The return of “Woman-Ochre” to campus marks the final chapter in a long saga, but also the start of a new story.

Having the painting back at the university means a whole new generation of students and scholars will get to view and study the piece.

“The recovery, restoration, and return of ‘Woman-Ochre’ opens up exciting intellectual pathways for students and faculty in the visual arts and beyond, including the ‘afterlife’ of works of art, the long history and relationship between art and crime, and the scientific study of artistic materials and techniques,” said Andy Schulz, UArizona vice president for the arts and dean of the College of Fine Arts. “And, of course, it is a key work in the history of mid-century American modernism and a cornerstone of the UAMA’s strong collection in this area.  I look forward to seeing and supporting the rich and varied scholarship and research that will be catalyzed by this important work.”

The painting’s fame is also likely to draw new visitors to the museum, which houses works by other prominent artists including Georgia O’Keeffe, Jackson Pollock and Mark Rothko.

As for who stole the painting, the identity of the thieves is not officially known. However, suspicion has fallen largely on Jerry and Rita Alter, who owned the home where the painting was found.

A documentary film called “The Thief Collector” delves more into the Alters, a pair of New York City schoolteachers who retired in New Mexico. The film will be screened on campus at Centennial Hall on Oct. 6 at 7 p.m.

Van Aucker and his business partners – the unlikely heroes in the story of “Woman-Ochre” – will attend the film screening, as well as a news conference and opening reception for the exhibit. Museum staffers have grown close to the three men, frequently exchanging text messages about not only the painting but everyday life.

Miller and her museum colleagues recognize that the story of the stolen painting could have ended much differently had the prized piece been discovered by someone else.

“We feel like the luckiest people in the world that the painting fell into their hands,” Miller said, “and that we got the privilege of getting to know them and becoming friends with them.”

“Restored: The Return of ‘Woman-Ochre'” will be on exhibit at UAMA Oct. 8-May 20. The exhibit tells the complete story of the painting, from its creation through its theft and remarkable recovery.

UAMA is open from 10 a.m. to 4:30 p.m. Tuesday through Saturday. General admission is $8; seniors and groups of 10 or more are $6 per person. Admission is free for museum members, children, university students and employees, active military personnel, American Alliance of Museums members, and visitors with a SNAP card or tribal ID.